← more from
AntlionEntertainment
Get fresh music recommendations delivered to your inbox every Friday.
We've updated our Terms of Use. You can review the changes here. 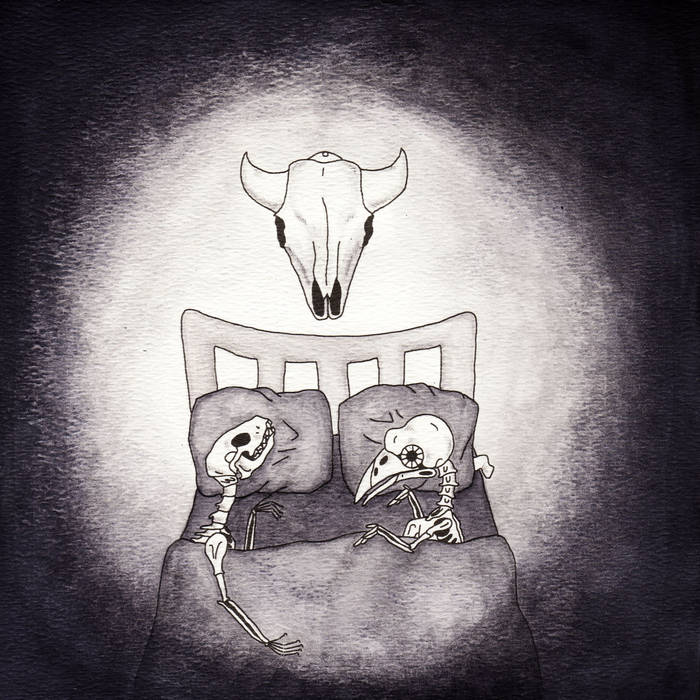 An old man in Jiangsu province told me that there is a tree full of wren birds near a temple in Suzhou. People who make a promise over a burnt offering at the temple are bound to their oath. According to legend, if someone broke their promise, a wren at the temple would die. This is a song for dead wrens. The German poet Paul Gerhardt said, "When a man lies, he murders some part of the world." The Chinese legend of the wren in Suzhou presents a literal interpretation of these words. "White Envelope for Wu Wren" is a funeral dirge for a bird killed by a broken promise.
*Funeral money is given in a white envelope (白包) in China.
一位来自江苏的老者曾对我说，在苏州的一座古庙旁的一棵苍树上，栖息着数只鹪鹩鸟。每一个在庙中供奉祭品并誓下诺言的人都需要对他们的承诺负责，约束自己的行为。根据传说，一旦有人违背了他许下的誓约，庙中的一只鹪鹩鸟便会死去。这是一首写给所有过世的鹪鹩鸟的挽歌。德国诗人Paul Gerhardt曾经说过：“当一个人说谎时，这世上的某些事物就会被他谋杀。” 这段关于苏州鹪鹩鸟的传说便是对这段话语的生动演绎。《给苏州鹪鹩的白包》便是一曲为那些因违背的诺言而失去生命的鸟儿所作的丧歌。

Track 2: Snake Eats Pig
composer - K. L. Fortson
cello - Tommy Chen
Bass Guitar - K. L. Fortson
Mixed & Mastered - Michael at Wanmei Music Studio (Suzhou, China)
The title of this piece comes from the Chinese Zodiac. Each animal is said to represent certain personality traits, and to interact with the other animals in various ways. The snake and pig are said to be enemies. I imagined the two beasts in a funeral dance of inevitability: the pig and snake sway together; the pig knows from the start that it will be devoured by the end, just as the snake knows that by trying to consume the whole pig--as its gluttonous urge demands--it will die, but neither can go against their own nature. It is a piece about being unable to go against drives that lead toward self-destruction.

Track 7: Crack the Needle
Composed & conducted - K. L. Fortson
Electronics - K. L. Fortson
Bassoon - Yongjin Yun
Recorded - Michael (乐音石) at WanMei Music Studio (Suzhou, China)
Mixed & Mastered - K. L. Fortson
For bassoon and electronics:
The pops you hear in the electronic sound file accompaniment are part of the recording and not an issue with your stereo. The electronic sound files were created by combining recorded piano and percussion with synthetic MIDI instruments ; then, using a homemade lathe, these sounds were cut onto DIY records and played on an old Edison model 78 RPM player. The sound files were then looped upon themselves and re-recorded onto another DIY record until the point where the needle of the home-made lathe would pop out of its groove, marking a spot where another instrument would come in on a strange off-beat--the rhythms (especially in the second section) are a result of the amplitude exceeding the physical capabilities of analog sound. These were then mixed down to the resulting digital file.

Track 8: Gravity Wins
Composed & conducted - K. L. Fortson
Bassoon - Yongjin Yun
Tubas - Jamal Boukhnouch
Violin - Nikita Olinevich
Viola - Joyce Huang
Double Bass - Fu Chun Chang
Recorded - Michael (乐音石) at WanMei Music Studio (Suzhou, China)
Mixed - K. L. Fortson and Michael (乐音石)
Mastered - K. L. Fortson
Special thanks to: Antoine Tacquenier
I was struck by the feeling of exaltation in the Navajo Magic Feather Dance, and the concept of the dance itself: a feather, seemingly suspending itself and dancing along to the performance due to the vibrations of a drum. However, the dance ends, and the feather ultimately goes back to being inanimate, and so behind the joy there presents itself a feeling of simultaneous mourning because the audience knows the illusion can not endure.
The idea behind this piece is the sadness of knowing we can live in dreams for only a moment. We build ourselves wings so that we can fly, but eventually reality sets in and, just like Icarus, we must come crashing back down to earth. Infinite to zero: Gravity Wins.

Track 9: Whales Floating Belly Up
Composed - K. L. Fortson
Mixed & Mastered- K. L. Fortson
Featuring ASMR by Corrina Rachel of PsycheTruth
Premiered live at University of Northern Colorado's "Open Spaces New Music Festival" 2016 (with additional live improvised guitar).
Preferred live setting: all participating listeners are seated in a room in total darkness wearing headphones playing this same piece at the same time, seated in chairs over subwoofers.
Program Notes
Whales Floating Belly Up (10'00") is 2 channel stereo fixed media piece composed of three complimentary movements, all of which were mixed in a way that explores the symbiotic nature of analog and digital sound at all steps of the process: after all acoustic instruments were recorded and mixed down, the resulting sound was cut into home-made records (materials can be old x-rays, etc) with a crude home-made lathe, which was played back and digitally recorded for electronic overdubs and final mastering. A few crackles from this process remain audible in the digital file and an overall lo-fi "organic" sound results despite the mostly digital nature of the piece; by allowing such anachronisms we can explore the contradictory pull between the past and the future on the listeners' experiences.
The first movement contains a low pulsing wave that was created by exploiting a bug in my digital organ's sound processing: if a chord was held on the organ setting and remained held while changed to vibraphone, an oscillating and enduring warm baritone frequency resulted; hitting additional keys on the vibraphone setting resulted in the strange pulses around the beat. An electric bass was bowed and pitch-shifted down one octave to sub-sub-contra levels to further enhance the embryonic feel of the tone, while two violins panned hard right and left play harmonic glissando and a guitar picks aleatoric harmonics. Reaching a crescendo a piano and digital percussion comes in, including sampling Harry Partch's "Marimba Eroica", a giant sub-contra instrument that is so low it is almost felt rather than heard.
The second movement begins with the same drone but now produced acoustically from strings, but it departs from the minimalism of the first with a large instrumentation. A full string section results from 1 violin digitally pitch-shifted across multiple octaves, sometimes distorted or reversed, backed by a synth mellotron choir, brass, and winds. The guitar tone resulted from recording an acoustic guitar at close proximity into a highly gained microphone for distortion to occur rather than using an electric guitar with pedals, which further blurs the nature of analog instruments when it comes to digital recording. The digital percussion against a sampled acoustic timpani further blurs the line between the digital and the acoustic components of this vast artificial orchestra. A percussive piano rounds out the ensemble.
The last movement returns to a digital drone, this time created with a MIDI perc organ playing E-flat/C -1, it's lowest organic note on a true pipe organ, resulting in overtones that seem to phase in and out as "mechanical crickets", with an austere performance by digital harp and piano (pitched nearly 2 octaves below acoustic lowest limit),and a paper-feed "programmable" acoustic music box, ending on stark sub-bass tones that stereo pan as they fade out.

Bandcamp Daily  your guide to the world of Bandcamp

The Hammer and The Relentless from the Boston band Malleus stop by for a chat.